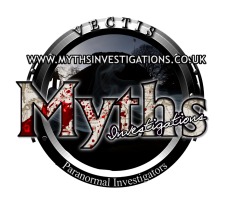 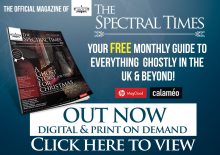 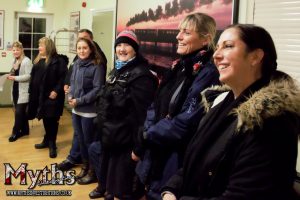 The Myths Team in Full

Public Events, what can you say about them – they can be great fun, but also the most stressful types of events you can hold, not only are you worrying that your own team have their game face on – but also that you can give your guests an interesting and engaging evening, it is after all your Team reputation!

I’ve always held up in high regard one rule – ‘to be honest.. no matter what’, if it’s a quiet night – void of any paranormal activity? – it’s better to admit it and move on, than to try to invent or fake something. It was decided at the outset that we set out a whole slew of interesting projects and experiments for our guests to partake.

With the event scheduled for a 7.45pm start, and what I can only describe as a ‘micro-storm’ battering the window with only 2 hours to go, it’s certainly not looking very promising!

Now the howling winds and hail have died down, it’s time to pickup our guest Medium for the night – the lovely Amunet – something feels quite strange, can’t put my finger on.. the air is certainly charged with electricity.. But what!?? – On entering the car, Amunet also remarks how odd it feels, with house lights flickering – and strange lights piercing the sky.. it’s gonna be an active one!

Forty minutes to go, should be fine as long as this gap in the weather holds up – we’ve only just walked across the train tracks to our base for the night, when Amunet informs me she’s just seen a little girl playing with a ball, an old woman watching us and what looks like a soldier waving! – yeap.. our resident spirits are ready for us. (all reported on our previous investigations – she’s certainly tuned into their wavelength tonight!) 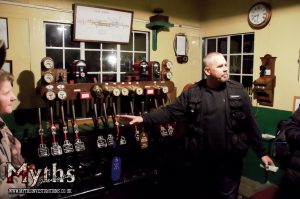 Our guests for the evening start to arrive – let’s get this show on the road. After the welcoming presentation, we split up into 2 groups, with Steve, Marie and the rest of the Myths Team heading off to investigate the Railway Holiday Carriage – while Myself (Paul), Amunet and paranormal friends we’ve ‘borrowed for the night’ (Nick & Charlotte Denning) – escort our guests into the signal box.

Roger our Team Photographer & Safety Officer gives us a little history of the building, before we try some psychometry work on one of the levers. A few of our more psychic guest’s pick up the energy of a man in his later years rushing about frantically in his work, pulling levers and operating the various trackside equipment.

We leave the confines of the room, to be drawn to an area behind the railway buildings – Amunet is picking up on what looks like a soldier standing on the distant hedgeline. Using her abilities she connects with him, inviting him over, while I hand out our k2 equipment to our guests.

Before you say anything’, says Nick.. ‘Im not psychic but I get the feeling he is up high!

.. Amunet agrees with him, ‘its as if he’s standing on some sort of box or table!.’

A few minutes later the k2’s flicker into life, not just the one of two but the FIVE we have – could it have been the generator that’s just kicked into life behind us? Nick heads over to it for a base reading of his own, before returning to say it wasn’t that giving off the readings.

Over the course of the next few minutes, Amunet is able to tease out some personal details from our friendly spirit. His first name is James, he’s dressed as a soldier from World War 1 – travelled here by train, with quite chronic chest problems.

“ I felt he was in shell shock as his head was hung low and was propped up against a large object? – he wore a beige army uniform and his head and right arm were bandaged with blood visible. I could see tents around him although no one else was there with him. “ 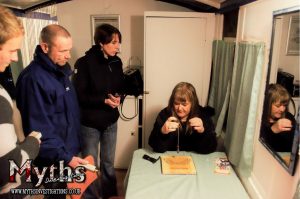 It’s time to travel to our second location for the night, the lovely holiday carriage, with Myth’s Team member Maria conducting a pendulum experiment, it’s clear to see we have a spirit with us. I turn on the Ovilus… Maria asks if the spirit is male, the pendulum slowly starts gaining momentum, swinging to the ‘yes’ position of the board she has infront of her.

‘Your not a stranger to what’s going on’ shouts Amunet from the small bedroom, ‘you’ve done this before!’ – ‘DEMON’ spits out the ovilus. We safely close down the pendulum board and thank the spirit for communicating with us.

The train yard next.. and already Amunet picks up on a man with a J in his name, he’s a driver of quite significant standing. Turns out we are in contact with ‘Jacko Jackman’ – quite a character in his time at the Railway. Amunet describes him in detail, a quite short, dark skinned man, wearing overalls – his chest is exposed with a chain and medallion, ‘Can you give me some more personal information?’ asks Derek – Director and Railway Safety Supervisor for the evening.

The lovely ghost of the past ‘Calbourne’ loco

‘He was in the Navy, and has a tattoo on his upper arm – and for some reason he is showing me a tiny oil can’ says Amunet. As we later find out, Jacko used to make model steam trains and other miniature working models in his spare time. We notice that he’s able to use the k2 to communicate next to Amunet, and politely ask him to affect the guests k2’s as well.. Which obligingly he does!

With Myths Team Members Steve and our SJ entering the dark-side of the museum, they immediately sense they not alone. They ask for whoever is there to come forward, …footsteps!! – they stop just infront of them, ‘ok, you’ve made your point – now please back off’ says Steve.. The footsteps can be heard trailing off into the distance. Steve later on during the evening also mentions that two of his guests reported seeing what looked like a ghostly face staring down at them from one of the railway carriages.

“ As the Team’s Photographer and having a logical mind that needs hard evidence before being convinced about paranormal activity, I had an inexplicable incident. The Public investigation had reached the “Train Story” museum and members had split up to perform experiments or investigate carriages. I sometimes after taking photographs like to go off on my own and sit quietly in a coach to see if I can hear or see anything before returning to the group.

I opened a carriage compartment of a Victorian four-wheeler and sat down. Immediately I became aware of a knocking sound, a regular series of clear knocks on wood from within the compartment. At first I thought that it was just the carriage settling after I sat down, but blow me after a short pause another regular set of knocking. I got out back onto the platform to check the other compartments but apart from Steve on the other side of the Platform talking to a member of the Public no one was around.

I sat back in the same compartment and listened…it started again. Wanting for someone else to confirm what I was hearing I caught Steve’s attention and beckoned him to get in, unfortunately at the same time two more people turned up and by the time I got them quiet to explain and listen, the knocking stopped.. how frustrating!!

I went back to the carriage later in the evening but the sounds never returned. Am I convinced? Let’s just say that I have an open mind and this was the most unusual incident I’ve had on any investigation to date. “

“After I found out about the tapping in the carriage, I sat in corner and concentrated to connect felt a spirit of a young man in his twenties very upset and distressed, I feel he had been shot and was very distraught. I managed to make a quick psychic link with him and felt the name Jeff connected to him.”

Back to our story at hand..

Meanwhile my group of lucky people were being ‘introduced’ to what we call the vortex wagon, no matter how hard you try – you cannot stand still in it. After a few minutes both the men in the wagon report that they have strange lower back pains, with one of them saying it feels like he is being pulled backwards. 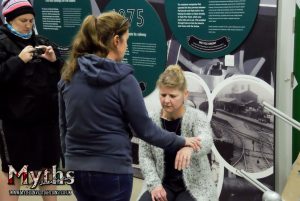 Up into one of the carriages now, with Charlotte joining Amunet – together they piece together some of the past, they remark that it feels quite hostile – as though it’s been through some sort of explosion?

Just then the carriage.. HOW TO DESCRIBE IT!??? .. JUMPS! – we all feel it, there’s absolutely no reasoning for it – but the carriage moved! – the 8 of us all felt it, and with some force too, knocking us off balance, it was as though an explosion had gone off! – we’ve been investigating the railway for 3 years, been in that very carriage many times, but this was something extraordinary! – it seems the spirits certainly wanted our guests to enjoy the experience.

With the evening coming to close, it was time to wrap things up – a quick debrief by the team, and off our guests went, hopefully with a tale or two to tell. We all sat back, wow! – what a night!.. let’s hope the railway has many more secrets to tell us as we investigate it further.

A big thankyou to our hosts at the Isle of Wight Steam Railway, in particular Derek Bishop for his kind help and enthusiasm with all our events – not forgetting as always the hard working Myths Team, with supporting help from Medium Amunet, Nick & Charlotte Denning.

We use cookies to ensure that we give you the best experience on our website. If you continue to use this site we will assume that you are happy with it.Ok